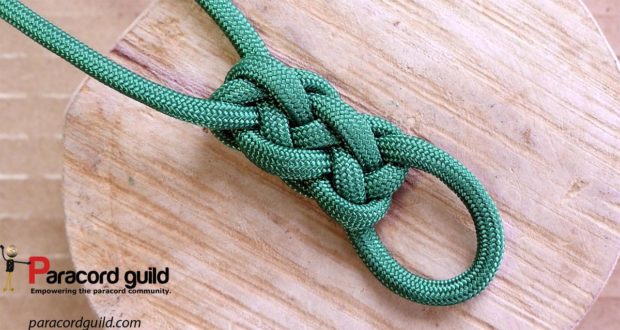 In this tutorial we are going to tie a flat gaucho knot.

The knot we are covering today is rare and quite exotic. It was covered by Luis Alberto Flores in one of his books (which are really hard to find). It originates from among Argentinian braiders who are world famous for their skill. The knot we will take a look at resembles a gaucho knot, at least in my opinion. It can be used to decorate a variety of projects. Knife lanyards and key fobs are the first that come to mind for me.

In the tutorial below I will show you how to tie the knot. There is a photo and a video tutorial available. The knot is not really all that hard to tie.

We will need a single strand of cord to tie the knot.

Start by making a loop. Pass the working end under the standing end.

Pass over the standing end, then under and through the loop (so under-over).

Pass alongside the standing end on its left, over-under.

Over the standing end.

A video tutorial on the tying process is available below: